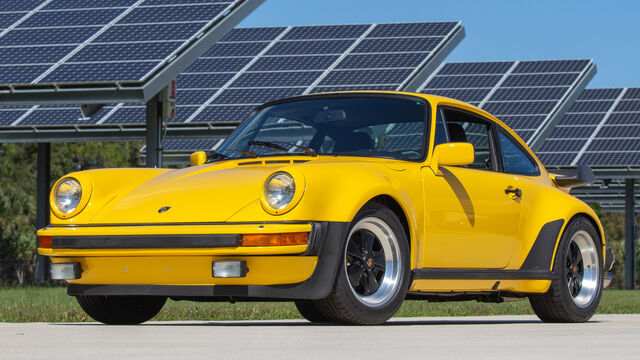 The Porsche 911 Turbo, known internally as the 930, was the first totally successful and ultimately the most enduring application of turbocharging to a road-going automobile. The ingenious and always methodical engineers at Porsche had learned about turbocharging through their development of the 917/10 and 917/30 racing cars that dominated the Can-Am series during 1972 and 1973. They then set about applying what they had gleaned from racing to the 911 road car. After a $2 million development cost, the production version of the 930 debuted at the Paris Motor Show in 1974. The 3-liter engine made 260 horsepower, and visually the Turbo could be distinguished by the “whale tail” rear spoiler, wider wheels and flared wheel arches. Export of the car to the United States didn’t start until 1976, but when it did the 930 became one of the most desirable cars on the road. Now fondly remembered and recognized as one of the most important road-going Porsches of all, it is highly collectible.

This 1978 Porsche 930 Coupe is the recipient of a fresh, total nut and bolt restoration that started with an already clean, straight 57,000-mile original example. During the exhaustive restoration, which is documented in receipts totaling $80,000, the engine was completely rebuilt and bored out to 3.3-liters, and the seats were updated to electric ones from a 1979 Porsche. It is finished in a bright yellow that complements the aggressive Turbo bodywork, and has a black leather interior that looks better than new.

With just test miles since it was completed, the restoration is not only exquisite but also very fresh. Vintage 930s range widely in quality but this car, totally restored with an incredible attention to detail and without consideration of expense, is one of the very best.